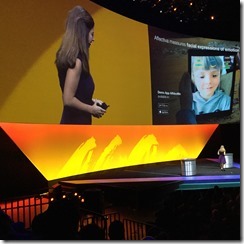 Affectiva’s vision is that one day we will interact with technologies in the way we interact with people. In order to achieve this technologies must become emotionally aware. This is the potential for emotional AI enabling you to change behavior in positive ways. Raina mentions that today we have things like emoticons but that these are a poor way to communicate emotions. They are all very unnatural ways to interact. Even with voice AI, they tend to have allot of smarts but no heart.
Studies have shown that people rage against technologies like Siri because they are emotionally devoid. There is also a risk that interaction with emotionally devoid technology causes a lack of empathy in human beings.
Affectiva’s first foray was to use wearable glasses for autistic people to provide emotional feedback on human interactions. Autistic people struggle to read body queues. They are now partnering with another company to make this commercially available using google glass.
Raina’s demo shows the technology profiling facial expressions in real-time. They do this by using neural networking to feed 1000s of facial expressions to the AI so that it can recognize different emotions. They now have the largest network of facial recognition data. The core engine has been packaged as an sdk to allow developers the ability to add personalize experiences to there applications.
Some of the possible use cases are personalizing movie feeds based on emotional reaction. Another use case is for autonomous cars to recognize if the driver is tired or angry. They have also partnered with educational software companies to develop software that adapts based on the level of engagement of the student.
The careful use of this technology has been why Affectiva has created the Emotion AI Summit.  The Summit will explore how Emotion AI can move us to deeper connections with technology, with businesses and with the people we care about. it takes place at the MIT Media Lab on September 13th.
Posted by Paul O'Doherty at 10:57 AM