Peter wants to talk about game changers in medicine. Peter looks after critically ill children and is interested in any advance that helps his patients. Peter references a few game changes in medicine such as antibiotics. Antibiotics were discovered in the 1800s. With the discovery we were able to save patients that we could not before. Another game changer was anesthetic which allows us to deliver surgeries that were not possible before.

A game changer moves the bar on the outcomes for all patients. Peter’s innovation is Life-like rehearsal through medical simulation.

The problem in pediatrics is that the exception of medical emergencies do not happen often enough to perfect the treatment and approach to them. Medicine is also an apprentice program in which we are often practicing on the patients that we are treating.

In other high stakes industries simulation and practice are foundational. Take for example the airline industry. In the airline industry when they looked at bad outcomes it was often the lack of communication in a crisis. The medical industry is not immune to these freezing or lack of interaction with the whole team. Airline simulators are used to help the cockpit crew to practice interaction and approach to various emergencies.

So how do we take these methods to the medical industry? In Boston they have a full 3D simulator so the team can practice before the actual surgery. Through 3D printing and special effects typically found in the movie industry they are able to recreate surgery simulators using incredible authenticity.

Prior to this one of the real surgical practice techniques involved making an incision on an actual pepper and removing the seeds. By creating a simulation we are able to practice and drill by leveraging techniques common in other high risk industries in the medical field. Pictured below is Peter with one of the medical simulators, notice the realism. 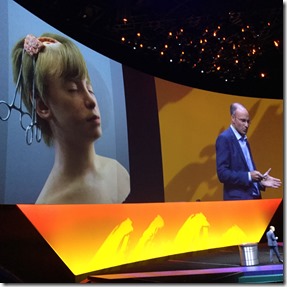 We do not stop at simulation; we also look at execution. Adopting the team approach used in formula one pit crews for quick efficient focused effort and communication we drill the team.This enables our surgical team to reach a level of efficiency not previously possible. This is a game changer in the medical field.