Hugh Herr (@hughherr) takes the stage and mentions that prosthetics have not evolved a great deal over the decades and are passive with little innovation. Hugh Herr mentions that he lost both legs from frostbite iin a mountain climbing accident in 1982. During the postop, Hugh mentioned that he wanted to mountain climb and was told it would never happen by the doctor. The doctor was dead wrong. He did not understand that innovation and technology is not static but is transient and grows over time. 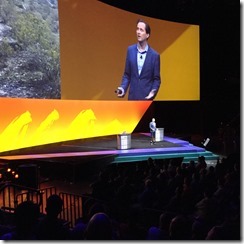 Hugh actually considered himself lucky as because he was a double amputee he could adjust his height by creating prosthetics that were taller. Hugh references the Biomechatronics limbs he is wearing on stage which have three computers and built in actuators. Hugh’s passion is running the Center for Extreme Bionics. Extreme Bionics is anything that is designed or implanted into the body that enhances human capability.

Hugh explains that when limbs are amputated surgeons fold over the muscle so there is no sensory feedback to the patient. Dr. Hugh and team have developed a new way of amputating. The new ways has surgeons create a little joint by ensuring there are two muscles working to expand and contract. With this new method the patient can ‘feel’ a phantom limb. By adding a simple controller you can track sensory movement that can be relayed to a bionic limb.

What they learned is that if you give the spinal cord enough information the body will intrinsically know how to move. But what about paralysis? The approach right now is to add a cumbersome exoskeleton to enable the ability to move. Work is being done to inject stems cell into severed spinal cord with the results being an incredible return of mobility.

Dr. Hugh and team are testing crystals embedded in muscles to relay information along with light emitters to control muscles. In this way they can build a virtual spinal column of sensors enabling mobility that was once considered impossible.

Hugh mentions that they are going to advance from their current foundational science in Biomechatronics to eliminate disabilities and augment physicality. It is important that we need to develop policies that govern the use of this technology so that it is used ethically.