OpenStack it typically used to repatriated workloads from Public Cloud. It really does require the entire OpenStack framework along with the ability to manage and monitor it. You need visibility to manage all the layers; vRealize can plugin to this stack and provide you this management. VMware Integrated OpenStack “VIO” is an integrated product approach. VIO is truly OpenStack so VMware uses all the code from the opensource thread. The whole stack is fully supported from VMware. Essentially we are combining OpenStack and the SDDC framework from VMware.

As mentioned, it fully integrates with vRealize Suite. With 3.0 it is Mitaka based along with an extremely simplified the deployment; Compact VIO. You can also Import existing vSphere workloads. When VIO 2.0 was introduced it provided seamless automated upgrade and rollback. With VIO 3.0 this has been enhanced with modules like Glance having native ability to see VMware templates.

This allows you to quickly standup OpenStack and import existing workloads. Mitaka improves the manageability and scalability along with the overall user experience while reducing the amount of steps. In addition Nova was simplified, one step process for integrating identity.

The VIO 3.0 reduces the profile from 15 VMs to 7 -  9 VMs. In addition VIO provides full HA support and zero downtime. Database replication is included to ensure no loss of data.

In compact mode the footprint is down to two (2) VMs. This is Ideal for small deployments. The database is still backed up in realtime so no database loss using compact mode.

You can now quickly import vSphere VMs into VIO. Once imported you can start managing VMs through the OpenStack APIs. VIO delivers AWS Productivity with Private Cloud Control. This ensures the AppDev teams can have the flexibility they need but the Operations team maintains management and control. VMware is seeing great uptake in VIO. The momentum is growing around this product.

The upgrade process is extremely simple; it is one of core featues of the design that the deployment and upgrade is this straighforward. the Management console enables you to stand up the 3.0 environment and migrate everything over. 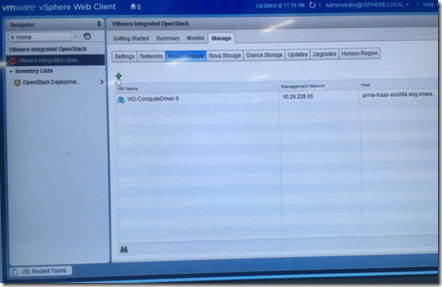 Highly regulated industries are making this shift to repatriate public workloads from the cloud. Publing a Private Cloud using VIO allows you to avoid the line rate of moving workloads back and forth.

People want to build features and ship them to customers as quickly as they can using Linux Containers. Multiple Containers share a kernel. Docker is perhaps the most popular vender in this space. Containers enable you to go from DEV, TEST and PROD at an accelerated pace. In addition to across environments you can deploy cross clouds. For highly regulated industries moving containers into production can be time-consuming. The challenge with containers really is around operations, security and monitoring.

The Old approach for Containers was to use a vSphere VM with a Container engine. In the creation of the VM using this model sizing becomes a challenge. Also the visibility is at the VM level not at the Container level. This makes it hard to identify noisy neighbor issues between containers on the host. VMware Integrated Containers is direct integration between the Container engine and the vSphere host. This allows transparent visibility and management from vCenter and the command line. You can create the container host in vCenter and provide the endpoint directly to the developer. The developer can then spin up the containers as they see fit.

In this Demo it shows a few of the capabilities including the vApp getting created.

When you query the endpoint the vSphere characteristics are passed through vs. the old way, which presented the Linux VM information. Visibility is to the container from a developer perspective but it is a VM to the vSphere administrator. This allows you to run containers along side other VMs. You do not need to setup a new set of hosts.

The beta was announced at VMworld 2016 (Note: vSphere 6.0 U2 is required to run “VIC”) along with a newmanagement portal and central registry based on Harbour (A PHP based user interface for managing Docker containers). The Open-source version can be downloaded here at https://github.com/vmware/vic .

You can do this ofcourse with Docker using Swarm but  leveraging vSphere Integrated containers gies you native vCenter clustering provided by the VMware environment.

Welcome to the software defined society; this is in many ways an invisible transformation. Often the only visible sign of this change is things going away; old business model are co-opted by new models. Apple sells more music than the music industry combined. Robert talks about things being vaporized; replacing physical media with software. Your smartphone has adopted the persona of over 25 digital devices over a very short period of time.

Robert sites a retailer owned by tesco.com in which they show pictures of products in subways. Consumers can scan them and their products are provided at their next stop. Ironically this company which started in Asia, went to this model because they could not afford the realestate to bring their stores to market, so they brought their stores to the consumers.

In addition this is tranforming information; information is becoming atmosphere. Information is being liberated and distributed freely. Universities in the states are all introducing free cloud based streaming services of their ciriculum. Why, because they have no choice because new startups are doing this already.

Money is being vaporized. Bitcoin is referenced, but its success is not important as it has proved that the blockchain protocol or trust protocol works at scale.

By 2020 we will have 5 million applications. These applications are replacing everything in your wallet. Robert also sites the simple keycard in hotels being replaced by software. On phones with Near Field Communications “NFC” you can book and walk directly past the checkin to your room.

As good become feature rich they shed the characteristics of products and become services. For example historically the automobile was a huge transformation; it shaped our cities and shifted our economies to petroleum based.

Young people do not see the car as a symbol of freedom; they see it as an obligation. Today software is replacing the car threw new models based on carshare such as Ubber. Uber is now valued at 62.5 Billion which exceeds the valuation of GM and Ford. Every auto company now has a ridesharing or autonomous car innitiative.

What companies like Uber represent is a big shift; They are imposing digital rules into the real world. When Uber responds to critisizm that they go around regulations they respond that they are pushing regulation down to the consumer. The evaluation and control is done on the spot by the end user. Uber launched the first self-driving cars in Pitsburg. They were not the first, there are now several autonomous car startups deploying around the world.

What is exciting is that the software models are coming out of the cloud and effecting the world we live in. Airbnb’s private valuation exceeds all but three of the top hotel chains without owning a single piece of realestate. In addition this is transforming us as well; the first thing we do when we want to engage is to look for an app, if we don’t find one we move on.

All these services depend on the cloud. The invisible part is the massive amount of compute power that it takes to make this happen.  The most important part of the cloud is that it will reshape your organization. Companies shift from making products to digital services.

We are about to go through the next Trillion dollars of change in wearable, implantable and digestable computers. Intelligent technology that is able to react to the environment around us. Once cities deploy LEDs they are able to integrate sensors, cell towers and other data collection points across the city so that the city transforms into the computer.

In 2010 we entered the Zettabytes era (1.2 Zettabytes). This is a 1 followed by 21 zero’s. In 2014 we generated 4 Zettabytes. Data is the new oil. The datasets we have now however are to big for us to handle. This is why AI (Artificial Intelligence) and Cognitive computing has come into vogue; It is the only way we can deal with it.

The business plans of the next 10,000 startups are simple, take anything and add AI to it. The drivers for this change is Cloud, but due to compliance these will be hybrid Cloud environments. There is no industry that will not be impacted. James Dimon from J P Morgan Chase gave a warning to the banking industry that silicon valley is coming. New startsup in silicon valley, backed by venture capital dollars are looking to challenge the old banking models.

Therefore Robert states “The forecast is Cloudy with a chance of reinvention. The future of work is entreprenurial and the future of technology is Hybrid Cloud.”

Posted by Paul O'Doherty at 7:43 AM No comments:

You know when I attended the Day 1 keynote with the Cross Private to Public Cloud demonstration, there was one thing that I struggled with. It was the value of a Hot-migration between Private and a Non VMware based HyperScale Public Clouds (like Azure, Amazon and Google for example). While it had a wow factor; Public Clouds have very different frameworks from the VMware SDDC model. Because of this, customers tend to develop into them vs. migrate to them.

With the great access I get to the show I was able to ask my question directly to Ray O'Farrell @ray_ofarrell the CTO of VMware. Ray explained that while a migration could be of benefit to avoid vendor lock-in to a Public cloud, he did not see VMs migrating dynamically to and from different HyperScale Clouds in a DRS like fashion. The value of the VMware Cloud Services tech preview was more around the ability to deliver cross-cloud management from a security and compliance perspective, rather than as a migration tool. 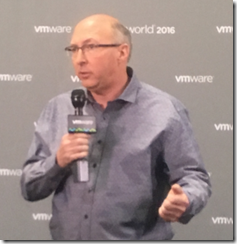 Consider if you will a customer that has a Hybrid environment with multiple Public Clouds that they are using for building applications. Without a cross-cloud management framework where would they start if they were asked for a compliance audit? VMware's solution is designed to address this and with the integration of Arkin (vRealize Network Insight) and NSX components, visualize security problems and enable you to bring them into compliance.

I asked if the scenario would be different to a VMware Public Cloud Target? Yanbing Li @ybhighheels the Senior VP and GM of the Storage and Availability Business Unit at VMware responded and mentioned that when using VSAN stretched clusters this is indeed foreseeable to a VMware centric Cloud. Storage may still be used in a HyperScale Cloud but the inherent VM format translation would make the technical problem a little more challenging from an engineering perspective.

The foundation that VMware has layed out looks to be one of great value, it is going to be exciting to see how this early tech preview delevops moving forward.
Posted by Paul O'Doherty at 9:36 AM No comments: