For VMware App Volumes you will need an App Volume Management server and database.  You can deploy Windows 2012 R2, however it will require .NET 3.5. .NET 3.5 can be a pain on Windows 2012 as it is not part of the default installation.  The easiest way to install .NET 3.5 is to ensure that you have the media or iso file you used to deploy Windows 2012 mounted.  Once the media is mounted run the following command from the command line (assuming it is mounted on the “d:” drive:

Installation is pretty straight forward and begins with launching the setup. 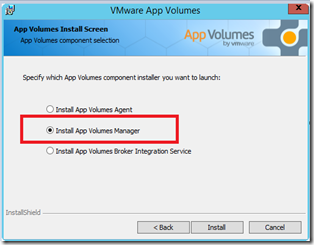 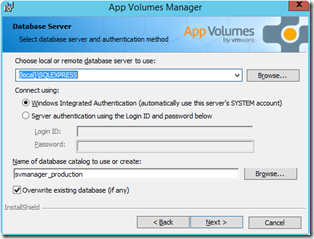 Now that the product is installed, you will need to configure it.  You can do this by selecting the App Volumes icon on the desktop.  The first time it is launched a Getting Started Wizard is run as shown in figure 1.30. 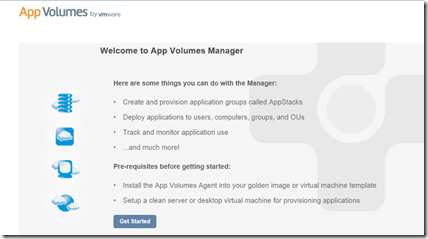 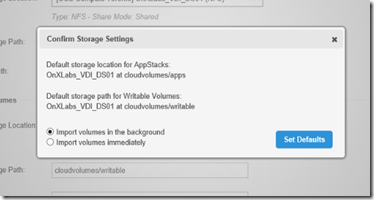 At this point you should be able to access the App Volume Management Interface as shown in figure 1.05.  While we have loaded the Management server and software we still need to create some “AppStacks” which we will do in the next Post so stay tuned.

Posted by Paul O'Doherty at 1:11 PM No comments:

Okay so the title is a little hokey but the topic is cool.  I have been interested in CloudVolumes since VMware made the acquisition last year.  “App Volumes” (the VMware release of CloudVolumes) is now available along with the appropriate documentation. If you are like me and have many things to keep tabs on, a great primer is always appreciated.  In these series of posts we will take it out of the box, install it and take it for a bit of a test run.

There are a couple of different pieces to App Volumes: the App Volume Manager, the App Volume Agent, the Microsoft SQL database for the metadata and the Provisioning desktop.

The App Volume manager provides the software and administrator interface, the Agent is installed on both the provisioning desktop and any other target desktop you wish to deploy an App Volume to.  Which brings me to an important distinction, App Volumes is a deployment technology vs. an encapsulation solution like ThinApp. Because of this, you can actually use them in conjunction with each other.

When you deploy App Volumes a series of templates are deployed to the datastore you specify. These templates are actually vmdk files that are used to create the “App Volumes”.  Keep in mind that both the provisioning and target desktops or Remote Desktop Session Host (RDSH)  Servers must have access to these “App Volumes” so that they can be mounted.

There are actually two types of volumes that you can create; a volume that contains applications, referred to as an “AppStack”.  An AppStack Volume is created by attaching an App Volume to a designated provisioning desktop (A desktop that has the App Volume Agent) and then installing Applications.  The installation of applications is no different because the redirection is transparently handled by the App Volume Agent.

Once the applications are installed, the newly created “AppStack” is un-mounted from the provisioning desktop.  It is then available for assignment to any number of virtual desktops or Windows RDSH servers that are running the App Volume Agent. AppStacks are mounted “Read-Only” when assigned.

In addition to an AppStack Volume there is a second Read/Write volume type called a Writable Volume. A Writable Volume is assigned to a single desktop.  Writable Volumes allow the storage of user specific information such as User Profiles or Files.

Now that we have looked at the basics, we will focus on the installation in the next post so stay tuned.

Posted by Paul O'Doherty at 5:50 PM No comments: