Once you have setup the Provisioning desktop then you are ready to deploy\assign a new “AppStack” to it.  To create a new AppStack login to the App Volumes manager as shown in figure 1.01:App Volume Manager

From under the VOLUMES folder heading and AppStacks tab, select the Create AppStack button as shown in figure 1.01. 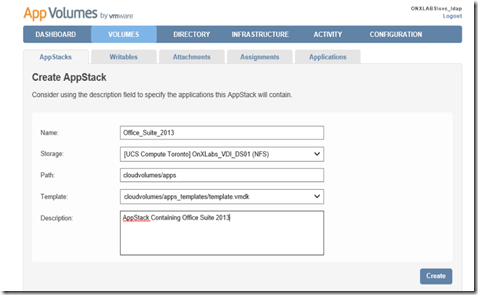 Provide a Name, Select the datastore from the Storage drop down. Select the Template from the dropdown and provide a Description and click Create as shown in figure 1.02.

You will be prompted to determine if you want the AppStack created in the background or wait for it to complete first.  Select the appropriate radial button and click Create.

Once it is created you will notice that it’s status is set to “Unprovisioned”.  We will want to provision it to our Provision desktop so select the AppStack and click the Provision button as shown in figure 1.03: Provision the AppStack. 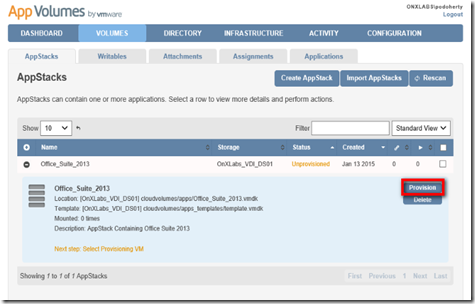 You can filter the name of the Provisioning desktop by typing it in the Find Provision Computer field and clicking the Search button a shown in figure 1.04: Deploy AppStack to Provision desktop. 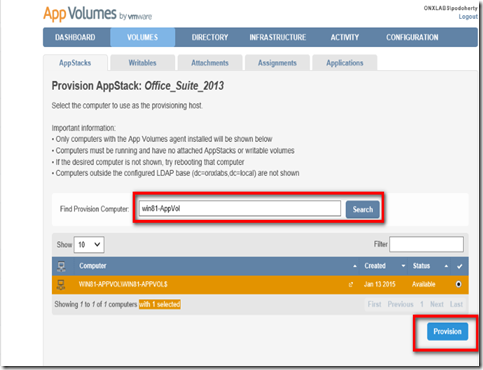 Install the application(s) as you normally would and once complete click OK.  When you click OK the AppStack is unmounted shows up for assignment in the management console as shown in figure 1.06: AppStack Assignment. 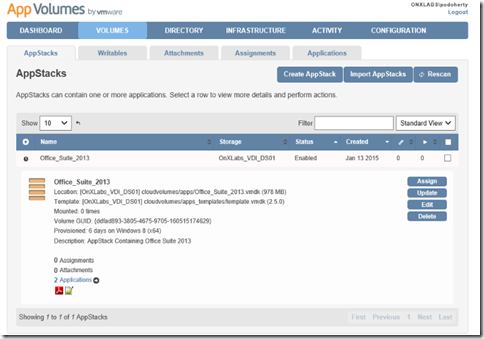 We are now ready to Assign the AppStack to a group of computers to deploy the Applications at the speed of Cloud.  We will cover the last step in the process in the final post.