Chris Wolf presented at the VMUG today and started with the concept of a liquid world. Chris mentions we are living in an increasingly liquid world in which we are facing new competition and new challenges at an increasingly rapid pace.  According to Gartner most CIO and CEOs are heavily focused on their datacenters.  This means allot of time is spent on lights-on with limited time spent on innovation.

We need to start asking ourselves if the day-to-day activities we are engaged in are commodity tasks or deliver real value.  Every business must provide network, compute and storage; there is little advantage in the task of provisioning these services.

Think of the datacenter as a series of modular interfaces that we can plug into.  These interfaces may be provided by OpenStack, Cloud Foundry or Docker Containers.  VMware wants to enable this flexibility by building it into the Software-Defined-Data-Center (SDDC).  Standardizing at the SDDC layer allows consistent tooling across disparate workloads.

According to VMware, the SDDC is made up of: 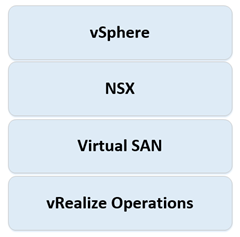 Chris uses the analogy of the smart phone to explain how security should work; we no longer memorize numbers, we just select contacts from a list.  Security should be similar. We use it without having layers of complexity.

Approaching this with traditional security toolsets is both complex and difficult.  NSX is targeted to address this by delivering micro-segmentation through policy control.  This allows us to secure individual VMs so that an exploit of one does not present risks to the remaining.  VMware believes that through software and automation this can be delivered easily without operational overhead.

VMware has made some significant updates to the Software-Defined-Datacenter in the first quarter of 2015.

VMware has beefed up vSphere 6.0 to handle Scaled-out architecture in addition to providing integrated Openstack and Linux Container Support (Docker).

vSphere 6 has the ability to instantly clone a VM (Project Fargo). Initially it is targeted at VDI workloads.  A new child VM can be created from a parent VM in milliseconds.  This is similar to the way Linux Containers (LXC) work, delivering the speed of containers through a VM.  Think about the capability in combination with VMware App Volumes; delivery of both virtual desktops and applications dynamically on demand.

Long-Distance vMotion is delivered in vSphere 6 (supported within 100 ms of latency between locations).  This works not just cross cluster but also cross vCenters.

Fault-Tolerance is supported on 4-Way virtual SMP (4 vCPUs).  This enables many more mission critical workloads to take advantage of this “always-on” capability.

New to vSphere 6 is the Content Library which syncs templates, ISOs and OVFs globally.  This ensures images are consistent across the entire organization.

vSphere Virtual Volumes (vVOLs) are designed to enable the native features of the storage array within the virtual infrastructure.  With vVOLs you could do native snapshots and replication at the Virtual Machine (VM)/volume level.  This is done using the VASA (VMware APIs for Storage Awareness) APIs, exposing the features of the SAN/NAS devise to vSphere.

Chris finishes by encouraging the community to have a look at these new capabilities to understand the value they bring.
Technorati Tags: #VMUG #virtualevent
Posted by Paul O'Doherty at 9:22 AM